The ongoing fight to save Preston's iconic bus station from the wrecking ball is never far from the news in Lancashire. The Brutalist structure holds a special place in Glasdon history as the home of the very first modular buildings produced by the company.

Designed by Keith Ingham of Building Design Partnership, in association with structural engineers Ove Arup & Partners, Preston Bus Station was the largest of its kind in the world at the time of opening. The station has bays for 80 buses and a multi-storey car park.

A key part of the plans involved the installation of information and ticket kiosks throughout the enormous building. Glasdon Ltd of Blackpool - at the time of design less than a decade old - worked with the architects to develop a modular design of kiosk that could be adapted to the site's varying requirements while maintaining a uniform appearance. Glasdon Glassfibre products offered a high quality finish and almost no maintenance requirement.

The prototype units supplied to Preston Bus Station became the foundation of 45 years' continued success and product development. Mass production of the Europa(TM) Modular Building saw Glasdon Glassfibre kiosks and cabins spread world-wide, and led in turn to the Olympic(TM) Modular Building, which featured prominently at several consecutive Olympic and Commonwealth Games. The Olympic Modular Building is still a popular choice with clients today, and many early models are still in service.

To talk to our dedicated Buildings and Housings sales team, telephone 1800 656 606 or email enquiries@glasdon.ie today. 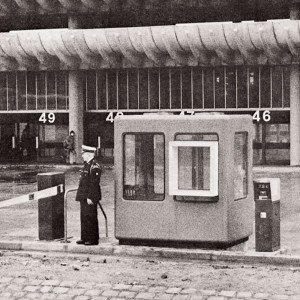 Prioritise Safety, with FOD Bins by Glasdon
16 January 2020
The Glasdon Guide to Specifying Cycle Parking
13 January 2020
Complete Guide to Genesis™ GRP Kiosks
06 December 2019
How to Protect Water Safety Equipment with Guardian™ Lifebuoy Housings
13 May 2019
Which materials do Glasdon use for their seats and benches?
24 April 2019
View All
Signup to receive our e-newsletter